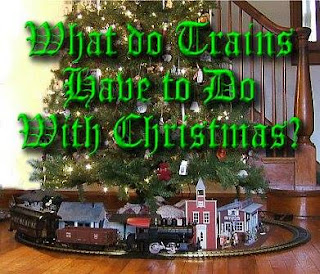 Except for the carols of the holiday season no other sound can stir memories like the sound of a Christmas Train. Christmas and model railroad trains are inseparable. Do you remember seeing your first toy train circling the family tree on Christmas morning. Here’s one such enjoyable recollection.

From “Smart Boys Swimming in the River Styx” by Robert Bomboy

A grandfather I know has a pleasant and still shining memory from his first Christmas in his family’s new home.

He was not quite six years old that Christmas morning, standing in wonder and anticipation at the top of the second-floor staircase. The staircase was enclosed and had a right angle at the bottom, so, as he looked down, he couldn’t see into the rooms below, but only the glow of a wonderfully warm orange light. At the same time, he could hear a hollow roaring sound that had probably awakened him. It made him a bit afraid, but the beautiful glow gave him confidence, and so he started down, one step after another in bare feet and pajamas.

He could smell the sweet balsam of the Christmas tree even before he reached the bottom of the stairs and turned toward the middle room. Even today, the memory is so strong and so good it almost makes him cry out in joy. The room below was full of warm-colored light and full of the Christmas tree. The tree stood on a plywood platform nearly as high as his chin. Round red, green, blue and gold ornaments – they must have been four inches across – reflected the light and made tiny but magically beautiful pictures of the room and everything in it. The platform and tree sat in the bay window, and, as he took one step and then another, making his way slowly as far as he could around the platform, he saw shining glass pine cones, red ceramic bells, an ornament shaped like Santa Claus, pinwheels in tiny circus tents that hung over the glowing Christmas lights so they would spin, and fantastically thin fluted shapes in red, orange, yellow and green blown glass. Silver icicles stirred softly and made the tree shimmer. From its very top a lighted red star shone brightly.

But best of all was the electric train. That was what had caused the roaring noise – the train running round and round beneath the tree on the wooden platform. It was a Lionel, and it had a puffing steam engine up front and a sprightly red caboose at the end. In between was a yellow boxcar with sliding doors, an oil tank car with the same realistic kind of ladders that he saw whenever his mother took him to town past the roundhouse and the railroad tracks, a low-slung gondola car, and a black coal car like the ones he saw all the time moving through town on the Delaware, Lackawanna & Western Railroad. A white sheet covered the foot of the tree, creating snowy mountains that the train had to make its way around. On the flat green surface of the platform, farmers worked beside a hay wagon; girls carried buckets of milk from the barn; cows and pink pigs grazed on the green felt grass. Automobiles and trucks ran along a gravel road on their way to the train station, and a flagman stood at one of the railroad crossings.

The grandfather who was once a little boy still smiles when he thinks of his mother and father. The custom in their house was that they would not put up the Christmas tree until after he and his baby sister had gone to bed. He realizes now that his mother and father must have worked through the night on the tree and the platform and the train and the trimming of it all. They probably had just gone to bed when he woke up. And, knowing all that, he knows how much they loved him.