The Sunset Hill’s Illiana Train Society "Bull Moose Line" is being rebuilt within Sunset Hill Farm County Park located just off the intersection of
US Route 6 and  775 Meridian Road in Valparaiso Indiana. 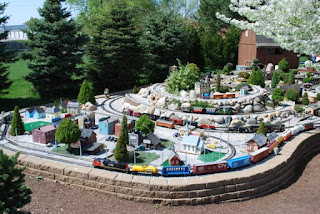 To more closely identify with their move to the Sunset Hill Farm County Park the membership of the Illiana Garden Railway Society voted to change their name to
Sunset Hill's Illiana Train Society.

Rather than build a layout as most G-scale modeling groups do, the Relocation Committee is seeking
$52,000.00 in donations
to use outside contractors to replicate the original “Bull Moose Line” over the septic field
on the north side of Sunset Hill Farm County Park.

The committee hopes to open the venue for public viewing sometime in 2019.