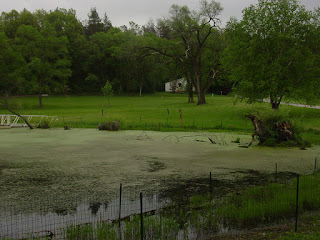 At its April meeting, the Porter County Park Board agreed to give the Sunset Hill's Illiana Train Society some extra space for its model railroad layout in the grassy area over the septic field west of the old restrooms along the road that leads to the amphitheater between Redbud Trail and the pond.

"We decided to make some changes that require more space, including a five-foot sidewalk around the display and a 12’ x 32’ building for storage," Sunset Hill's Illiana Train Society President David Ransom told the Park Board. He also noted that the organization may want space for picnic tables or future expansion.
The Sunset Hill's illiana Train Society had asked for a 40’ x 80’ plot of space last spring, and later their estimate went up to 50’ x 100’. The new design calls for a 64’ x 104’ space. Ransom also said that the buildings the group is looking at are prebuilt, barn-shaped cabins, and the train layout will be surrounded by a six-foot high fence to keep out deer. However, it won’t be a privacy fence, and visitors to the park and drivers passing by on the road will be able to see the layout, which has 1,100 feet of track that circulates in a rough oval around a model town called Franville. There will be an engine supply yard at the north end of the tracks.
Porter County Board President Craig Kenworthy, for his part, said that there was no harm in allowing the Society to use the extra space because it doesn’t amount to much. He asked that the Sunset Hill's Illiana Train Society update the Porter County Board about any future changes in the design.


The completed venue is expected to open to the public  in the Spring of 2019.